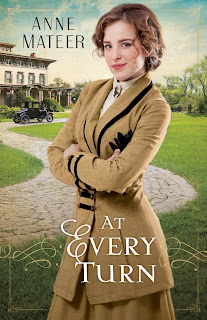 At Every Turn by Anne Mateer

Caught up in a whirlwind of religious fervor when two missionaries speak at her church, Alyce Benson impetuously pledges three thousand dollars to mission work in Africa. She’s certain her wealthy father will simply hand her the money. But when he refuses, she must either stand up in front of the congregation and admit failure, or raise the money herself.

Alyce harbors a secret passion for speed and automobiles. It’s 1916, and the latest advancements in car engines allow some to post speeds upwards of seventy miles per hour! When she discovers her father’s company has sponsored a racing car that will compete in several upcoming events–races in which the driver will be paid and could win as much as five thousand dollars in prize money–she conspires with her father’s mechanic, Webster, to secretly train and compete.

But as Alyce comes across needs in her own community, money slips through her fingers faster than she can earn it. And when her friends cast aspersions on Webster’s past, she believes she might have trusted the wrong man with her secret. Will Alyce come up with the money in time, or will she have to choose between her promise and the man who holds a piece of her heart?