I know of the British rule in India mostly from literature—and then often only in snatches. The Secret Garden. A Little Princess. Rudyard Kipling stories. Vague references from the lives of British authors, whether their biographies or their stories from the 19th and 20th centuries. So when I realized that Christine Lindsay’s debut novel, Shadowed in Silk, covered some of this history, I knew I’d have to read it. 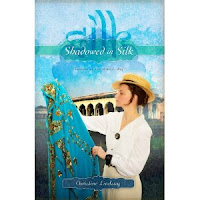 And I’m so glad I did. Christine made post WWI India come alive, with all its sights and sounds, its political unrest, its clash of cultures and religions. I was captivated by Abby’s story, how it intertwined with the British military presence as well as with the Christians working with “the least of these” in Indian society. If you have a penchant for anything British or anything exotic—or even better, both!—I think you will find something to enjoy in this adventure/romance. I know I did!
Shadowed in Silk is available now as an ebook (Kindle, Nook, etc.) and will be available in print this fall.
Disclaimer: I received this book at no charge from the publisher.