My husband and I have always said, to our children and to others, that playing sports teaches our children many life lessons. But this spring season, their sports activities illustrated lessons for me! 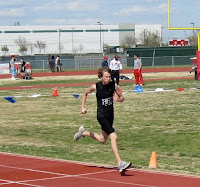 Our older son ran track. Now track is not his favorite. In fact, he really doesn’t enjoy it much. He ran long distances his freshman and sophomore year because his friend did. He managed to make it to the regional meet both years in those events. This year, he was ready for a break when basketball ended. But his football/basketball coach told him he needed to run track to get ready for next year’s football and basketball seasons. Being the dutiful child that he is, he complied. And then my lessons started.
The coach asked him to switch races, from the one-mile and two-mile to the half-mile. Now the half-mile race (or 800 Meter race, as it is called these days) is really a very long sprint. And my son is not a sprinter by any stretch of the imagination! But again, if there is one innate character quality this child possesses, it is obedience to authority. So he did it. And he gave it all his effort, in spite of it not being a sport or a race he would choose. He ended up making the regional meet by a hair and bringing up the rear (almost) in that race. But here’s what I learned: the coach was very proud of my son because he ran the race he’d asked him to run and did it with his whole heart.
Isn’t that how it is with God? Doesn’t he sometimes ask us to run a race not of our choosing? Do we still put our all into it, just because He asked? I’m afraid my answer is not always a yes to that question. But hearing my son’s coach basically say, “Well done, good and faithful servant”, even when he didn’t come close to finishing first, made me realize again that the Lord isn’t concerned about the results that appear before the world. He’s concerned with how we run the race He’s asked us to run.
In a similar vein, I sat through a dismal baseball season with my younger son. We had snagged a new coach, an older man who knows baseball and loves to teach it. So it was a learning year. The biggest thing these boys had to learn? Listen to the coach! When they were on the bases, if coach said run, you were to run, not worry whether or not you thought you’d be out. Your job was to obey. The responsibility for the outcome then lay with the coach.

Isn’t that how the Lord desires us to be? To have our eyes fixed on Him and our hearts so set on obedience that when He says run, we run. When He says stay, we stay, even if it looks to us like we could have safely make it to the next base. I admit, I often stop when He says go and go when He says stop. But I’m learning to trust His voice and obey, for it is obedience He desires, not sacrifice—and not necessarily a “safe” arrival. Just obedience.
So while we had little “success” on the track or the diamond this season, we all learned lessons for life this season.

2 comments on “Lessons for Life”