When I signed my book contract, I made a few commitments to the Lord for the new journey. One of them was that I would embrace every opportunity He brought my way to promote my book. Now, if you know me well, you know this didn’t mean I’d be a marketing machine. That’s just not me. It did mean, however, that if an opportunity came my way—even if it was out of my comfort zone—I’d do it.
So a couple of weeks ago, when an independent bookseller called and asked if I’d like to participate in a book signing with a NYT bestselling romance author, I said yes, though it tied my stomach in knots. I understood from the first it wouldn’t be about selling tons of books. It would be about making new contacts and gleaning wisdom from a writer who’d walked this road longer, and apparently walked it well. And I was okay with that. At least until the day arrived. Then I found myself dreading sitting quietly to the side while people swarmed the other author. But I knew the Lord had opened this door—I’d done nothing to seek it on my own—and so I prayed He would show me very clearly why I was to be there.
I arrived to find a flurry of people, though not as many as I’d anticipated. And I learned that award-winning, bestselling author Jodi Thomas had brought one of her award-winning co-authors, Phyliss Miranda, with her. I set up my books next to Phyliss, feeling like a wallflower at a high school dance. But I needn’t have worried. Phyliss struck up a conversation right away and made me feel at home. When she and Jodi discovered that this was my debut novel, they gave me several sheets of their “autographed copy” stickers to put on the books I signed, something they do whenever they meet a debut author. 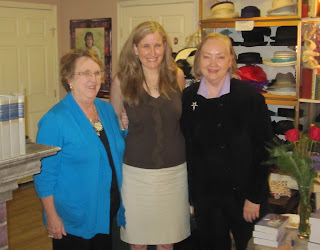 Phyliss, Me, and Jodi
Over the course of the evening, I actually sold a few books, but that wasn’t why I was there. I was there to get to know and to learn from two gracious and humble ladies. What did I learn? That the number of books sold at an event isn’t as important as the connection with the booksellers. That some books take longer to write than others, and sometimes, even after 20 years of writing, it takes time to understand exactly what story you are trying to tell. That it is hard to do events where you have no relationship with the store or its employees. That you should network with readers and book reviewers every where you go.
Some of these things I’d heard before, of course. But it helped to hear them again. Mostly I drank in their encouragement. I left there with three new friends–two authors and a bookseller. And I thanked the Lord that He’d given me that opportunity. The one I’d been dreading all morning. 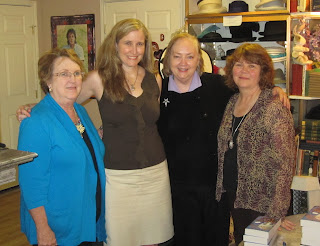 Phyliss, Me, Jodi, and Gayle, the bookstore owner